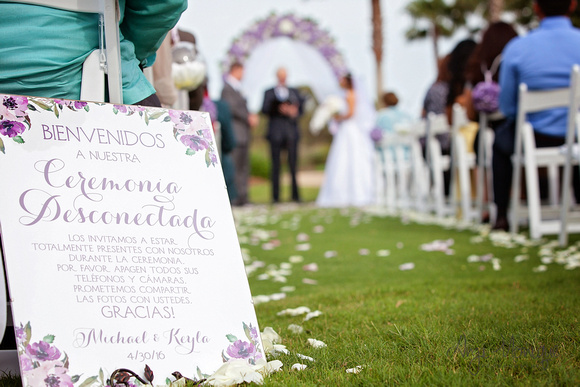 So let's talk about the Unplugged Ceremony. The goods. The bads. The in-betweens. And things that guests should consider when attending a wedding ceremony.

First, what is an Unplugged Ceremony?

An "unplugged ceremony" is when a couple that is getting married requests that guests refrain from using cellphones, pads, and cameras during their ceremony. The general rule of thumb is that a sign is posted and/or the wedding officiant will make a request to the guests to put away their devices and stay present in the ceremony. The goal for most is to have their guests there with them watching the event unfold without having their eyes glued to a device. It also intended to keep the pictures clean for the photographer who isn't having to contend with Aunt Elisa's giant hulking iPad sticking out into the aisle during the kiss. But let's talk more about that with the pro's.

Pro's of having an Unplugged Ceremony

As mentioned above, there are reasons for why couples regularly request their ceremonies be unplugged.

2. Guests' cellphones and pads and cameras can be a huge distraction to other guests who are there trying to watch the wedding take place.

3. Guests sometimes don't realize they're in the way of the photographer who is behind them taking a picture of a key moment, like that first kiss as a married couple. Nothing ruins an image faster than sticking your hand out into the aisle to get a picture with your device and blocking the view of the hired professional. And short of yelling at you from their position or running down the aisle and drop kicking your phone from your hand and creating a scene, there's nothing the hired professional can do and now the couple doesn't have the image they paid the professional to take, and it's not the professional's fault.

And now, the con's of an Unplugged Ceremony

As with anything, there's also potential con's to unplugged ceremonies.

1. IF the couple hired an inexperienced photographer who isn't familiar with their camera or exposure and the images come out awful, the couple does not have any back-up images of their ceremony. Or if the photographer's memory card fails or their equipment fails, or something happens and the images can't be delivered (this is another blog post in the making on why it's important to hire a legitimate professional if you can afford it). No matter the reasons, the couple doesn't have pictures of their ceremony.

2. A photographer cannot be everywhere at once and sometimes it's nice to have multiple viewpoints, especially if the couple only hired a company with one photographer. (This is actually why I include a second photographer in all of my packages)

So you're attending an unplugged ceremony....

As a guest how can you honor their request? Silence your cellphones and put your devices away. Respect their wishes. Whatever you do, don't be that person who ignores the request. No matter how well intended you may be, it's really rude.

But what if you're attending a ceremony that isn't unplugged?

As a guest, here are some considerations you should keep in mind so you aren't hindering the hired professional and you aren't blocking the view of other guests.

1. Try to sit in the back or off to the side so the light from your screen isn't distracting other guests and you aren't blocking anyone's view from behind you. ESPECIALLY IF YOU HAVE A LARGE PAD you're recording with. By sitting in the back, you can raise your device a little higher without ruining anyone's view or distracting them with a glowing screen while also getting a nice "audience viewpoint". Alternatively, shooting between the heads in front of you will frame an image nicely, but you'll want to keep your device low at shoulder level to achieve this look and get nice results.

2. TURN OFF YOUR FLASH completely. All your camera/phone/pad flash will do is light up the backs of the heads in front of you and darken everything else. You're much better off without it, trust me. Plus, it's incredibly distracting to everyone else and in some places, flash photography is banned.

3. DO NOT UNDER ANY CIRCUMSTANCES put your phone or device anywhere near the aisle. Don't do it. If you want to get the bride walking down the aisle, keep your device close to your body and follow her as she passes you so you aren't accidentally blocking the hired professional's view, who may be shooting down the aisle.

4. Just be mindful of your place in the audience and considerate of other guests and the hired professional.

Can you think of any other tips to add? Let me know!

Charli Smith(non-registered)
Really there is no point in having a really huge ceremony, only invite those whom are close to you and keep the budget down enough to go somewhere really nice on your honeymoon.
No comments posted.
Loading...
Subscribe
RSS
Recent Posts
To Have An Unplugged Ceremony or Not To Have An Unplugged Ceremony..... Two Things My Ideal Client Has Stonegate Manor Stylized Wedding Photoshoot Things to Consider When Choosing Your Wedding Photographer PART 2 Things to Consider When Choosing Your Wedding Photographer PART 1 A Harry Potter Themed Wedding Planning Your Own Wedding? {Laura+Justin} Wedding Sneak Peak Why is Wedding Photography an Investment? Happiness is a Lifetime of Love & Togetherness - Ortel Wedding
Keywords
photography wedding anji monique photography pictures love wedding photography bride michigan couples groom
Archive
January February March April May June July August September October November December
© Anji Monique Photography
User Agreement
Cancel
Continue