Sometimes we are called to do things we don't think we are prepared to do, and for me that calling came from a friend late Thursday night while I was grocery shopping.

"I have a huge favor to ask you," he began before diving into a story of heartbreak. A mother and a father found out their pregnancy had to be cut short. At the time they had hoped to find their baby's sex,  they were given devastating news that their baby had a genetic defect called Triploid Syndrome. This is when a fetus is carrying a full extra set of chromosomes (69 instead of the normal 46) and almost always results in the death of the fetus.

"She's being induced at any time now and they are planning a funeral and everything and April [a mutual friend who had contacted him] thought it would be awesome to give them pictures. I want to take the pictures myself but I don't know when she'll give birth and I don't know if I can do it because of my schedule. Is there any way you could do it if I can't? I know it's a lot to ask, I'm sorry."

"I can't do it," I told him as I explained it was only a few short days before I did the big migration to Michigan with my children and I had so much to do before then.

"But," I assured him, "I can post it to my photography network and see if I can find someone local that can help them."

I finished my shopping and headed home, the story weighing heavy on my mind. I posted it to my Florida HOF Tribe (a sisterhood of photographers) to see if anyone local to the Orlando area could help this family out. Someone mentioned Now I Lay Me Down To Sleep, a foundation that specializes in this kind of birth story. I searched their website for contact information but with each passing minute, I began to realize that maybe this had fallen into my lap for a reason.

When I was a little girl, I told my stepmother I wanted to be an Angel when I grew up. "You can't be an angel," she told me. "You're mortal." Fast forward to me at the age of 20, working as a Respiratory Therapy assistant at the hospital as I did my clinicals. I'd gone into a patient's room to administer his breathing treatments while his family watched on. He was a dying man, we knew this. His family knew this. He'd been sleeping for several days, they were just waiting for the final moment to come. So I come in and I place the mask with his medicine over his face and for the first time in days his eyes flew open and he grabbed my arm and pulled my hand with the mask away from his face and asked me as his eyes searched mine, "are you my angel?" while his family gasped in shock and amazement. I was just as shocked but I just smiled and took his hand in mine and told him everything would be okay. He relaxed, closed his eyes, and passed away a few hours later. But that moment that he looked at me with such an intensity.....it's forever burned in my memory.

So maybe this family was meant to have me there. Maybe I had a job to do and it was to tell this family's story. So I texted my friend and asked him to cover that night (I couldn't leave my children overnight) and if she hadn't given birth by the next morning, I would go to the hospital to be there with them.

I got to the Winnie Palmer Hospital for Women and Babies in Orlando a little after 2pm on Friday afternoon. I'd told the family I was coming but they did not know me and not wanting to impose on their private time, I introduced myself as soon as I got there and then went to the waiting area to give them privacy. After some time, one of the nurses waved towards me and said "are you here for Jessica? She'd like to see you."

"I went to find out the sex of the baby last Friday," she began. "I had to pay for the ultrasound myself because insurance didn't cover it, but (she) was rolled up in a little ball so the ultrasound tech couldn't even see what she was. So I wasted my money but apparently (the technician) had seen something that alarmed her because I got a call from my doctor on Monday to come in for another ultrasound.

"The amniotic fluid levels were extremely low and there were signs of serious problems with her heart. Her heart only has three chambers. But that can be fixed. They told me that there was a possibility she would be born and survive but require a lot of surgeries and we were okay with that. Then they told me that she probably wouldn't survive for long after birth but I could carry her full term and donate her organs. And so I was going to do that. But then, after they did the amniocentesis, they told me that it was far worse. She did not have kidneys and she was deformed and she wouldn't survive much longer in my womb. They told me they were surprised she'd made it this long."

And so they had given her the news that the child she carried was going to die. Suddenly their happy moment was thrown into a whirlwind of planning for a birth and a funeral. "She will be alive when she is born but she doesn't have lungs or kidneys and she has hyrdrocephaly [fluid on the brain]. I'm 18 weeks but she's underdeveloped. So she will not live very long."

I hugged her. It was all I could do. And then I stayed with her and Kyle through into the evening. I was starting to worry because I needed to get back to my children and still Fiona had not come.

And then on Friday August 19th, 24 hours after Jessica and Kyle had gone to the hospital, little Fiona Madison Crowell made her grande entrance into our world at 9:55pm, weighing 2.12 ounces and 5.7 inches long. And while her moments on this Earth were few, they were incredibly precious and she was very much loved.

And she was perfect in our eyes. 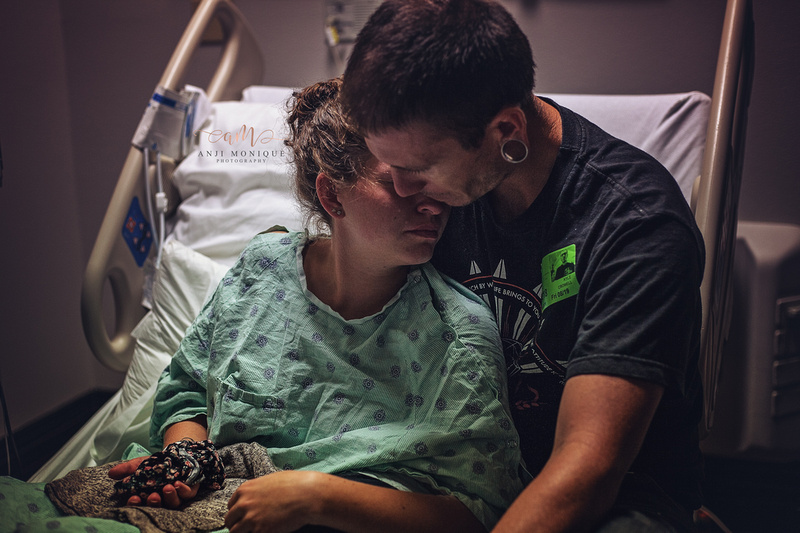 You can view more about Fiona and her family and make a donation to her funeral fund at https://www.gofundme.com/2k9xmb8

Debi Gehringer(non-registered)
My heart breaks for this mother and father. May God hold sweet Fiona in his care until they are there to hold her and love her more. May Jesus carry them when their grief won't allow them to walk and survive their loss.
No comments posted.
Loading...
Subscribe
RSS
Recent Posts
To Have An Unplugged Ceremony or Not To Have An Unplugged Ceremony..... Two Things My Ideal Client Has Stonegate Manor Stylized Wedding Photoshoot Things to Consider When Choosing Your Wedding Photographer PART 2 Things to Consider When Choosing Your Wedding Photographer PART 1 A Harry Potter Themed Wedding Planning Your Own Wedding? {Laura+Justin} Wedding Sneak Peak Why is Wedding Photography an Investment? Happiness is a Lifetime of Love & Togetherness - Ortel Wedding
Keywords
photography wedding anji monique photography pictures love wedding photography bride michigan couples groom
Archive
January February March April May June July August September October November December
© Anji Monique Photography
User Agreement
Cancel
Continue